Karate 1 Youth League 2018
A total of 1874 athletes took part in this youth cup. Alexandra competed in kumite (sparring) U14 Female +47Kg where she placed 7th out of 56 competitors winning by flags to Italy whilst losing the second match to Croatia 2-0. Croatia went up to the final giving Alexandra the opportunity for repechage. Alexandra went on winning 4-3 against Finland, 4-3 against Belarus and lost her third repechage match to Serbia 3-0. “The result obtained is very encouraging and reflects hard work and dedication. Let’s keep up the good work.” This was the comment of MKF National Kumite Coach Josef Antonelli. 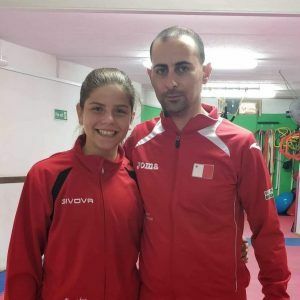 Youth Olympic Games 2018 Qualifier
A total of 318 top athletes from 94 nations participated in this kumite (sparring) knock out tournament. Jacob Camilleri competed in Kumite Male -68 Kg and Joelle Farrugia in Junior Kumite Female +59 Kg. It is the first time that the MKF, took part in an Olympic Qualifier Tournament since Karate has only recently been accepted as an Olympic Sport. The MKF is the only local Karate organization that is affiliated to the World Karate Federation thereby rendering its members as the only ones that can represent Malta in Olympic competitions. Such an event required intense preparatory work and provided valuable experience in both the mental and physical aspect of competition both for the athletes as well as the coach.

“It was an amazing experience where we saw a good performance from our athletes notwithstanding the highest possible technical level witnessed in this tournament. We would like to thank MOC for giving us this opportunity.” This was the comment of Sensei Joseph Mizzi, MKF National Kumite Coach.

COPYRIGHT ©MKF 2022. ALL RIGHTS RESERVED.
DESIGNED WITH LOVE BY DESIGN THE ROCK.